‘Hey, Norm,’ said Catren Morgan as she entered the room. ‘There’s a guy downstairs asking for you.’

Norman looked up from his desk.

‘I don’t have any old friends around here. What does he look like?’

‘What does he want?’

‘I dunno. He said it was personal so I figured it was none of my business.’

‘Fair enough,’ said Norman as he eased himself from his seat. ‘I’ll go see what he wants.’

He made his way from the room, down the stairway and pushed his way through the door into the reception area.

The door opened to reveal a man with long, straggly hair. He was standing with his back to Norman, gazing out through the window, but as he heard the door open turned around. Norman was so surprised it was a few seconds before he spoke.

‘That’s not much of a greeting for an old friend,’ said Slater.

‘Is that what we are?’ asked Norman. ‘Don’t old friends keep in touch? Especially when they’re supposed to be business partners.’

‘We were supposed to be in business together, or have you forgotten that?’

‘Yeah, I’m sorry about that, but Stella was so keen to get to Thailand when I told her I had a share in a bar out there—’

‘Look, I don’t begrudge you and Stella getting together. Any fool could see you were crazy about her, but you could have told me what you were doing. I turned up for work next day expecting my business partner to be waiting for me, but instead there was just an email telling me you’d gone. I had no idea when, or even if, you were coming back.’

‘Yeah, well, it doesn’t seem to have done you any harm,’ said Slater, truculently. ‘You seem to have managed okay without me.’

‘Don’t take that tone with me,’ said Norman. ‘What was I supposed to do? Just sit there and wait while you’re having fun half way across the world? I’m not the selfish one here. I’m entitled to a life, too.’

‘You’re right,’ he said. ‘I admit I let you down, and I didn’t handle things right.’

‘Yeah. Of course I do. I guess I was so wrapped up in Stella I wasn’t thinking straight. I’ve never felt like that about anyone before.’

‘So where is she?’ asked Norman. ‘Don’t tell me this is another of your relationships that didn’t last.’

Slater looked away, and when he looked back at Norman he appeared to be struggling to speak.

‘I’m sorry I messed you about but Stella was the real thing, Norm. I’ve never felt that way about anyone before. We even got married out there.’

Norman was puzzled. For a man who had just confessed to marrying the love of his life, Slater didn’t seem very happy.

‘So, what am I missing here? What aren’t you telling me?’

Norman felt the colour drain from his face.

‘She died in a hit and run accident in Thailand.’

‘Oh, Jeez! I’m really sorry to hear that. Did they catch the driver?’

‘No, but I don’t think catching him was ever on the cards.’

‘What do you mean it was never on the cards?’

‘I believe there’s some sort of cover up going on.’

‘Why do you think that?’

‘Because the police tried to fob me off with some bullshit about her death being an accident.’

‘I was there. I saw what happened. The driver had plenty of time to slow down, but he actually accelerated and steered straight at her. It was never an accident.’

‘But why would anyone went run her down?’

‘That’s what I wanted to know.’

‘So what did the police say?’

‘There was one guy who listened to me, but as soon as he started asking questions he was overruled by his boss and taken off the case. I did some poking around of my own, but I soon realised I was up against a wall of silence. The only thing I know for sure was that Stella had wanted to go to Thailand because she was trying to find someone.’

‘Who was she trying to find?’

‘What do you mean you don’t know?’

‘She never told me. I only found out because I discovered she had this contact in the Thai police who was helping her.’

‘That’s the thing. I found his contact number on her phone, but when I called him he told me he couldn’t tell me anything because it was too risky.’

‘I dunno, he wouldn’t say. I found out where he worked but when I tried to speak to him there I was told he was on leave. Then the next day some minion from the British Embassy travels all the way from Bangkok to tell me I have to leave the country.’

‘All he would say was that the Thai authorities had concluded their enquiries into Stella’s death, that it was an accident, and if I couldn’t accept that, and kept on pestering them over it, they were threatening to jail me. He told me I should leave with 48 hours.’

‘That sounds a bit extreme.’

‘That’s what I thought, but it turns out he wasn’t joking. Two days later I was escorted to the airport and told not to come back.’

‘Jeez,’ said Norman. ‘I see what you mean. That whole situation stinks.’

‘So, will you help me?’ asked Slater.

‘Yeah. You and me working together again. It’ll be just like the old days.’

‘Now hang on a minute,’ said Norman. ‘Don’t get me wrong, I’m really sorry about what’s happened to Stella, but I love it right here. I have a great job, I work with a great team, and I’ve met someone who actually wants to spend her time with me. For the first time in years I feel wanted and that makes me very happy. The fact is, I love it here so much I’ve even bought myself a little cottage.’

‘Look, I get that,’ said Slater, looking appealingly at Norman. ‘And if anyone deserves to be happy, it’s you. I just thought…’

His voice trailed away as it became obvious Norman wasn’t going to budge.

‘Well, I’m afraid you thought wrong,’ said Norman. ‘I ignored your track record and teamed up with you before, and look where it got me. I’m not prepared to lose everything I have here.’

‘That wasn’t the first time you flew off to Thailand without warning, was it? And you have a habit of throwing your toys out of the pram. If I gave up everything I have here, how would I know you wouldn’t do it again?’

Slater said nothing. He knew in his heart that Norman was right.

‘It’s taken me years to rebuild my life,’ said Norman. ‘And I’m not prepared to lose it all again. So, thank you for the wonderful offer, but this time around I’m going to pass.’

‘Okay,’ he said. ‘I won’t deny I’m disappointed, but I guess I can’t really blame you.’

‘Feel free to blame me if you want,’ said Norman. ‘But it won’t change my mind.’

‘All right. But can you find something out for me?’

‘Remember Stella was attacked? It turned her into a nervous wreck, and effectively ended her career.’

‘Yeah, I remember you saying.’

‘At the time she was doing surveillance on a drug dealer. Can you get a copy off the file for me?’

‘A copy of the file? Are you kidding?’ asked Norman. ‘She was working out of Winchester wasn’t she?’

‘In case you’ve been away so long you’ve forgotten your geography, that’s in England,’ said Norman. ‘This here, where I work, is in Wales. Do you seriously think I can access an old case file from Hampshire?’

‘What possible reason could a DS in a little town in Wales have for requesting an old case file from Hampshire that’s almost certainly a closed case? If you’re right, and there is something going on here, don’t you think such a request might raise a few eyebrows?’

‘I’m sorry, but I disagree. Maybe I’m being selfish, but I don’t have to do anything just because you say so. I’m afraid you’re on your own with this one.’

‘If you want that file you’ll have a lot more chance of success if you approach someone who works for the police in Hampshire.’

‘Actually you do, but there is also another way. You could do what I did and rejoin the Police.’

‘If there’s really a cover up, do you think it would be easier to investigate it from the outside, or from the inside?’

‘Well, yeah, I suppose that makes sense. But would they have me back?’

‘I can’t answer that, but I happen to know they’re crying out for experienced detectives in Hampshire.’

‘How d’you know that? I thought you were in a different country now.’

‘I know because they took Naomi back, and she keeps in touch with me.’

‘Naomi Darling? They took her back? Jesus, they must be desperate.’

‘She got a bit carried away one time and beat a guy up,’ said Norman.

‘A bit carried away? She put the guy in hospital!’

‘It was case of misplaced loyalty.’

‘The guy had previously knocked the crap out of you, if you recall. She was just settling a score.’

‘So how on earth did she get her job back?’

‘She took the trouble to learn how to control her temper.’

‘And they believe she can?’

‘She’s eight months into a twelve month probationary period, and despite provocation on more than one occasion she’s doing just fine.’

‘So, it should be breeze for me then,’ said Slater.

‘Except you threw your toys out of your pram and walked out, not once, but twice,’ said Norman. ‘You’ll have to convince them that won’t happen again. But, if you can do that, and find the right sponsor, you should be fine.’

‘Apparently it helps if you can find a senior officer and get him on your side.’

‘And you’re sure this will help me get my hands on that file?’ asked Slater.

‘I have no idea,’ said Norman. ‘If there’s a conspiracy it’s possible the file doesn’t even exist anymore, but at least you’ll be in a good position to find out.’

‘It’s okay, Norm. You’re right. I shouldn’t have come here, but I’m pleased I did, and I’m glad things have worked out for you. You’re a great guy. You deserve it.’

With that, he turned and walked away.

Just then Catren Morgan came into the room.

‘He didn’t stay long,’ she said. ‘I thought he said he was an old friend.’

‘We used to work together,’ said Norman. ‘But then we just sort of drifted apart. He was just passing through. He’s undecided about rejoining the police and was asking whether it had worked out for me.’

‘What did you tell him?’

‘I said it’s turned out to be the best decision I’ve ever made.’ 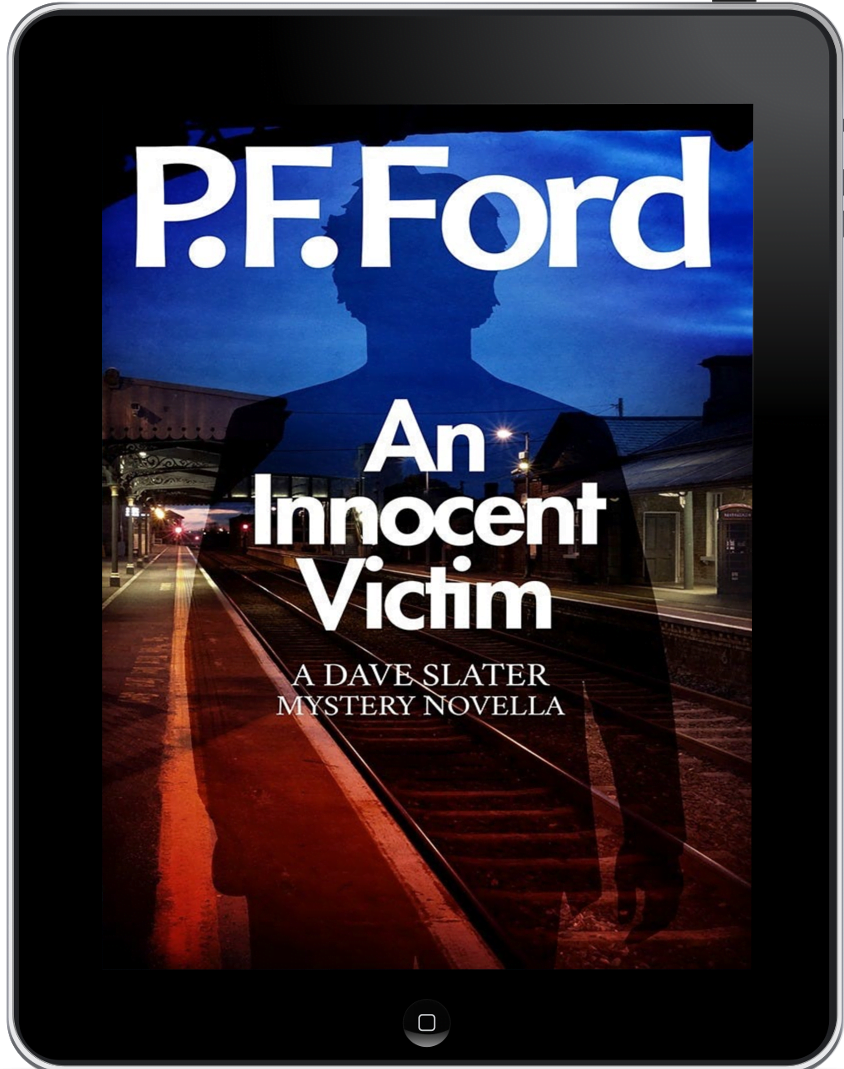 Receive a free novella when you subscribe to get monthly updates. Unsubscribe anytime. Keep your free gift.